Christmas in a Container: Holiday Goods Are Stuck Amid Global Port Congestion

Authorities at Long Beach Port hope port congestion will ease within the next six months, but industry analysts aren't as optimistic, with normalization predictions running well into 2023.

From January through to November, Long Beach port processed more than 8.6 million containers — about half a million more than the year before, but the line of ships waiting to offload continues to grow. Through the first two weeks of December, more than 35% of containers exceeded their allotted dwell time of nine days when moving by truck and six days by rail. Labor problems in the trucking, freight shipping, and intermodal shipping industry have only exacerbated the problem. This all has kept a lot of holiday goods locked up in containers with diminishing hope of reaching retailers by Christmas.

The Biden Administration pushed a plan to levy fees against aging containers that are sitting for extended periods. The highly-controversial plan hasn't significantly impacted the backlog as its implementation has been delayed six times now.

Adding to the problem are similar situations at ports around the globe and worsening ocean carrier reliability. Scheduled deliveries by ocean are running on schedule only a third of the time, according to a study of carrier reliability across more than 60 carriers and 34 trade lanes. On average, ships are arriving more than seven days past due.

Even when they arrive on time, long delays waiting to enter the port continue to be common due to lack of room for both ships and containers. After offloading, most containers are sitting for five days on Long Beach and Los Angeles ports — adding to the backlog and forcing more ships to wait offshore as space clears.

It’s caused many shippers to seek alternatives, such as air cargo, charters, and less than container load (LCL) shipping in hopes of getting goods to stores. In return, this is driving up rates and decreasing margins for manufacturers and retailers.

Port Delays Lead to Increased Inflation, Out of Stocks

All of this has also driven up consumer prices. Consumer pricing has risen at the fastest pace since 2008 as worries of more long-term inflation continue.

At the same time, congestion has led to diminishing inventories at a time when goods are needed most. Holiday sales make up as much as a quarter of the average retailer’s entire revenue generation for the year. So, when retailers can’t get the inventory. It’s a significant problem.

Consumers are finding higher prices, longer delivery dates, and an unprecedented number of items out of stock. Adobe Analytics tracks more than a trillion visits to most of the top 100 US online retailers. Compared to January 2020, out of stocks are up more than 170%.

Taylor Schreiner, director with Adobe Digital Insights, told CNN Business that they have never seen levels this high in the ten years they’ve been tracking out of stocks.

No Imminent Solution To Port Congestion

Goldman Sachs estimates that much as $24 billion in goods are sitting outside the Ports of Los Angeles and Long Beach alone. Despite optimism from Port of Long Beach Executive Director Mario Cordero, analysts say we're more likely to see bottlenecks continue through 2022. In December, Goldman Sachs warned its clients that there was no imminent backlog remedy.

"No immediate solution for the underlying supply-demand imbalances at US ports is available,” Goldman Sachs stated in its most recent research report.

Ocean freight requires a coordinated effort from ports, truck drivers, warehouses, and rail operators. One of the most significant issues in maintaining a smooth shipping process is the acute labor shortages. Despite recruitment efforts, the trucking industry is facing substantial manpower issues.

Delays at the port have hit owner-operators hard due to increased wait times to offload. Many owner-operators are turning down drayage shipping jobs to move freight for short trips from ship to warehouse or ship to rail for intermodal delivery. Having to wait 10 hours in line to pick up goods due to backlogs is no longer profitable for many carriers.

With major congestion at global ports and the continued labor shortages, there isn’t much of the Christmas spirit in the supply chain. Much of the Christmas goods are sitting in containers still in transport or sitting offshore waiting to be unloaded.

Tap into FreightPOP's weekly blog for manufacturers, distributors, Ecommerce, and 3PLs by subscribing to receive updates by email. 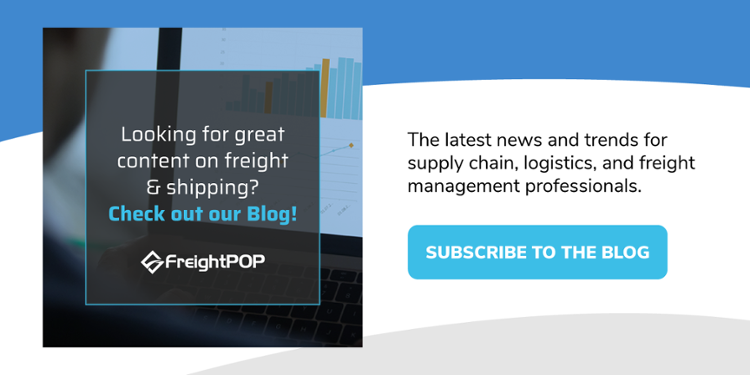 Tony Young, ERP Consultant, on the Value of Digitizing Logistics

How to Convince Management To Invest in a Transportation Management System

Convincing management to adopt/invest in a new Transportation Management System can be challenging....

Want the upper hand over carriers in negotiating contracts and spot quotes? See what a division...